Anton Sviridov. I love reinventing the wheel and I usually use Scala for that.

A man is defined not by the way he looks, but what he looks for. And these days it is exceptionally easy to find out, what you're looking for – Google provides access to your search history starting from a certain point in time which is probably different for everyone (my archive started from 2011 though it goes without saying that I've been using Google long before that). And while in different periods of my life I have found myself googling some really weird shit (like, really weird, from the depths of underwebs), I decided to rely on the safety of large numbers and post the results of this trip down the memory lane no matter what kind of deviation they shall display.

This doesn't serve any scientific purpose, it's more of a demonstration of the use of fantastic packages R can offer, applied to a dataset from a real world. This is not a tutorial on R language or aforementioned packages per se, but rather a primer of their usage in real (well, almost) world.

It's a well-known fact, that 70%-90% of data scientist's time is spent shaping the data into shape needed for exploratory analysis. And whilst there's no upper-boundary on the dirtiness of data (some things I've seen still keep me awake at night, especially in publicly available governmental datasets), this data will be somewhere in the bottom 10% percentile – most of the time is spent massaging the data, which is more fun than cleaning it and battling with missing values.

My previous attempt to analyse my own google searches was stumped by Google's own malfunction during archive creation, but this time I went to Web & App Activity and succesfully managed to download the archive. The main thing it contains is json files with queries:

Each JSON has the same structure:

Timestamps are in microseconds, but we don't need this kind of precision, so we can safely trim last 6 digits and get a regular UNIX timestamp that R can understand. Also, each query can be associated with several ids, each having a different timestamp – to my understanding, this groups image searches. We'll ignore that and just take the minimum of timestamps (or we could take the first one).

Given that the idea of working with multiple(!) JSON(!!) files(!!!) and R gives me shivers (my knowledge of available packages is probably severely outdated), I wrote a tiny Python script that converts everything into a nice flat csv dataset:

After running this script on the folder with extracted JSON files, we will have a csv file with two columns: timestamp and query. Fire up your R console, or RStudio(if you still don't use it, you need to stop here for a moment and rethink your life priorities).

If you don't have any of those packages, install them, they are guaranteed to transform the way you see data analysis, both in R and in general. Let's load our dataset and have a first look at it:

I kept the original integer Timestamp to see if the conversion worked as I expected. Also, I had to reorder the data frame, but only because my oldest queries were almost exclusively in Russian, which would reduce the demonstraction power.

I decided to take a look at how the language of queries changed over time. I'll use a very crude and inaccurate method of language detection (thankfully, Russian and English have completely different character sets), which will misfire on queries like "translate

So let's take a look at the code that generates the plot with cumulative sums of number of queries in each language per month. This will demonstrate the power and, even more importantly, the readability of the methods, provided by Hadleyverse's packages:

This is a very important step, which converts data in wide format:

To data in long "molten" format:

Note the doubled number of rows and different organisation of columns. This format is native to ggplot, hence the extremely simple plotting command at the end of the pipeline. 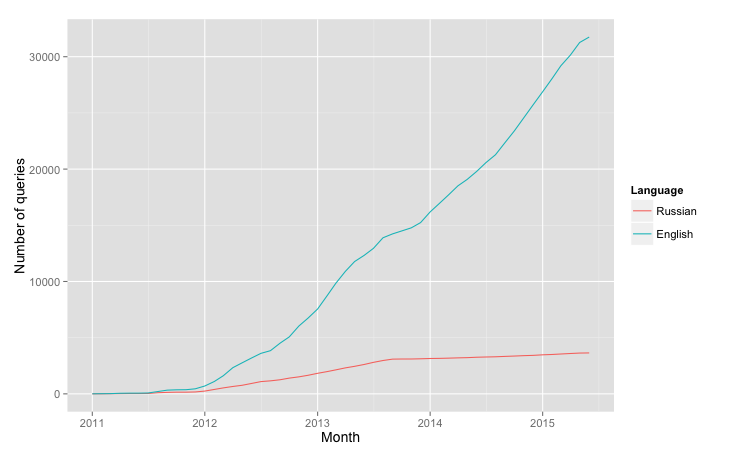 Which shows, that my transition into English culture started long before actual moving to London.

With that out of the way, let's do something slightly more entertaining – express my life in trends and topics without defining them manually. We will use word tokens as topics. So let's break down each query into a list of words:

makes use of dplyr's do method that provides a convenient method for running an arbitrary computation on a group of rows. In our particular case we merely extract all sequences of cyrillic and latin characters (note the apostrophe to avoid extracting "s" from "it's" and other similar cases). Then we unlist the nested structure to get a plain vector of words which will then be added to the modified group (with all words in lower case).

It's worth noting, that this operation takes a suprising amount of time (about a minute) for such a small dataset. Especially when extraction itself is rather fast:

My suspicion is that the constant reallocation of memory (we cannot predict the number of rows in the result unless we actually extract the words, that's the catch) slows down the process. Or may be some internal unomptimized routines in dplyr. Either way, I don't mind waiting for a minute, but I would certainly redesign this solution for a bigger dataset.

The general rule is to create the most obvious and readable solution first, and then optimise it bit by bit, should it prove necessary.

Back to words. Let's look at the rankings:

What "the"..? Not good. Let's filter out the stopwords. Gladly, R handles URLs better than any language:

Much better now. One look at the numbers suggests the kind of distribution I used to see al the time during my relatively brief experience with Information Retrieval - Zipf law. Let's take a closer look at it:

This is a relatively simple plot that doesn't use too many of the ideas we haven't used before. And this is what it looks like: 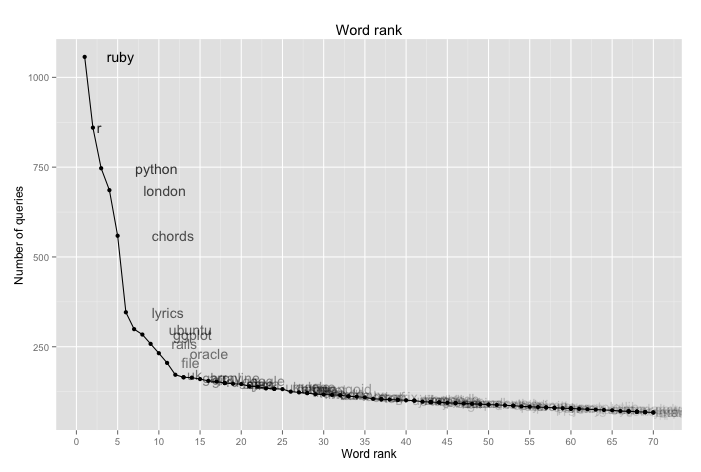 Just as suspected! This looks like a perfect example of Zipf's law, the kind of plot you usually see in the books(or log-log plot, but it's boring).

The interesting thing about this finding is that even on such small dataset with short queries, the law, which is supposed to hold for English language, still shines through. Even though "the" is only in second place - but this can be easily explained by the fact that any person familiar with how search engines work will usually omit this and other stopwords from the query as they bear little or no significance on results(with exceptions, for example "the who" vs. "who").

Now, let's do slightly more plotting - I have a sucpicion that the changes in my development stack were greatly affected by two events – moving to London to study and getting a job there a year later. I will demonstrate that change in the best way possible (subjective, of course), and then explain why those changes happened. But you can safely skip the explanation if you're not interested in my life. There is no quiz at the end, don't worry. Or is there?

We will take six of the top ranking words and plot their usage over time, identifying a couple of notable dates(guess what I'm going to call this variable). First, notable dates and top words:

The most interesting thing about the last line is .$Word - which is my personal favourite for extracting one column from the result of dplyr's pipeline. As you might have seen above, . has a special meaning in dplyr's pipeline - it represents data frame of current group. Without grouping it contains the entire dataset, and we use familiar $ to get one column from it.

Next, to the plot itself. It's not complicated at all, most of the lines are actually for customisation purposes:

The peculiar construct in geom_vline, xintercept = as.numeric(NotableDate) is required because internally time objects are represented as integers, therefore ggplot will expect xintercept to be of the same type, as the underlying scale. I find this feature(or bug) somewhat annoying, as I always forget the reason for the error message it produces.

We don't do much sophisticated processing here, instead we try to arrange the information on the plot in condensed manner, but so it still shows the underlying patterns in data. 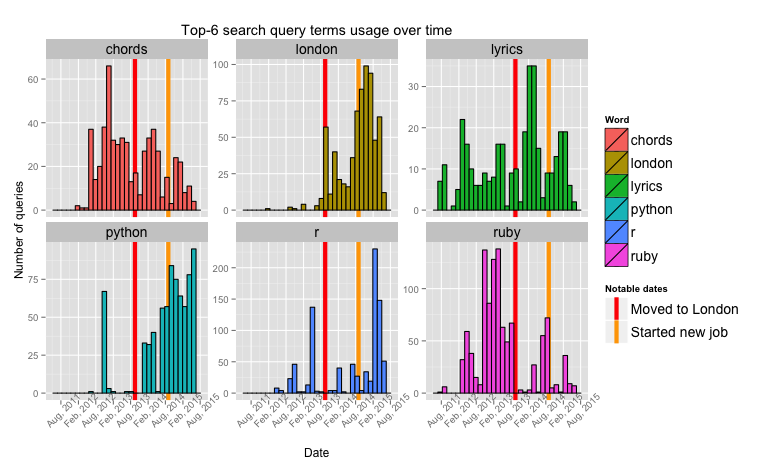 And here it is. The year between moving to London and starting a job was the year I was getting my Master's degree.

Personal notes (the ones you can actually skip):

Thanks for getting this far!

The code for producing all of those plots is available on blog's github, just feed it your own data and it probably won't explode(I take no responsbility, but you can email me)